The temperature outside finally dropped below the triple digits so we ventured down to the swimming pool before it closes for the season. 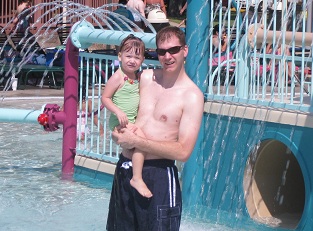 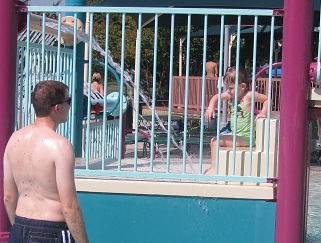 Carter finally gave up his umbilical cord stump so he can now take a real bath. 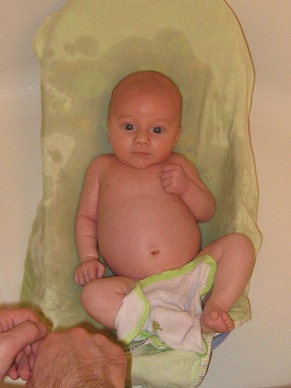 Six-and-a-half weeks is a very long time to keep your stump. Raine’s took a long time too, but not that long. I guess I just have a very strong attachment to my children!!

I am horribly behind on updating this blog and now that my laptop is dead I don’t have any photos to post anyway. That’s why I’ve decided to take this opportunity to tell Carter’s birth story. Be warned: it is a bit lengthy.

I have always thought that two years is an ideal gap between kids. So when Raine turned one, I started thinking about adding to our family. I wanted to avoid having another child right after the school enrollment deadline, so I thought August would be perfect. I mentioned to DJ that we should start trying soon but didn’t think too much about it.

In mid-November I started feeling like I was coming down with the flu. I was quite worried until I realized that I was missing some of the symptoms. In fact, the only symptoms that I had were severe fatigue and body aches. As soon as I realized that, I knew what I really had . . . a baby on the way.

We decided to tell our families on Christmas Day. I thought of all kinds of cute ways to announce it. But in the end, I was too tired to do any of them so we just came out and told them.

My first pregnancy was fabulous. I exercised regularly almost the entire nine months, I ate healthy, and I really loved being pregnant. I never had any of the discomforts that I always heard people complain about. And for the life of me I could not understand why people waddled when they were pregnant. Well, then my second pregnancy came along and by the end I was doing well just to waddle. My hips hurt, my back hurt, and I was really ready to not be pregnant any more.

On Sunday morning, July 11, I awoke to a massive contraction and thought “this is it, he’s on his way.” I was so excited to have gotten a full night’s rest right before I went into labor. I got up and took a shower, excited that the baby was on his way. But then the contractions stopped. So I went to church. And then to my meetings. And then back home.

Later that afternoon, I laid down to take a nap and the contractions started again. As soon as I got up, they stopped. At that point I knew there would be no sleeping that night for me. And sure enough, about 11:00 p.m. the contractions started and didn’t stop. About 3:00 a.m. I was convinced that this baby was definitely coming before morning so I called the Beal’s and Krista came rushing over to spend the rest of the night with Raine.

When we arrived at the hospital, I told DJ that I wanted a blessing so he gave me one in the parking lot. I was a little concerned because he kept blessing me that I would make it through everything that was going to happen and things like that. Let’s just say that even though it was meant to give me comfort, it really just made me worried about what was going to happen. I had been calm before that.

We arrived in labor and delivery, filled out the forms, I got poked a million times, and the nurse told me I was dilated 5 cm already. I wasn’t sure what I wanted to do for pain management this time around. I was thinking about trying narcotics instead of an epidural since my last one took 12 hours to wear off. The nurse told me that I could have the drugs if I wanted, but that she wouldn’t recommend it because they can have some weird side-effects on people. She then assured me that the anesthesiologist could be there in 20 minutes to give me an epidural whenever I wanted it. I settled in with my contractions and waited. Every now and then the nurse would come in and offer me a narcotic, followed by a statement about how I shouldn’t take it. I kept telling her that I just wanted an epidural so there was no point in having narcotics.

Finally, at 6:45 a.m. the contractions changed. They HURT!! I hit the nurse call button and told them I would like an epidural. Fifteen agonizing minutes later nobody had come into my room yet so I sent DJ into the hall to track someone down. The nurse came in, turned up my IV, typed into the computer and left. An hour later there was still no sign of the anesthesiologist. I was getting desperate. These weren’t just contractions any longer, I had the urge to push and I could feel that little guy moving further and further down with every contraction. The nurse checked me again and I was complete. Yes, I had just endured everything but the actual birth and still didn’t have an epidural. I was beside myself! (Let me just make clear that natural childbirth has never had any appeal to me whatsoever. I have always believed that the reason I was “saved for the last days” was not my righteousness, it was because there is no way that I could give birth without medication — strong medication!)

An hour and forty-five minutes after I had first requested an epidural, the anesthesiologist finally arrived. I could hardly sit for him to give it to me because the baby was so low. But there was no way that I was going to push until I was medicated. Unfortunately, it didn’t work. It only numbed my right side, and even that wasn’t very numb. They tried to get better coverage for me, but the fact of the matter was that I could feel it. It wasn’t as bad as natural childbirth would have been, but it sure wasn’t the fully-medicated experience that I had the first time around.

Despite it all, little Carter was born at 8:40 a.m. and I could not have been more delighted to be holding him in my arms. My near-death experience — ok, so I was really the only one who thought I was going to die — seemed a distant memory as I looked into his steel-blue eyes.

Carter was a great baby right from the start. He ate like a champ, slept like a champ, and was content as he could be. I instantly fell in love with his sleepy smiles and “stretchy” face (he loves to stretch). I couldn’t be any happier than I’ve been since this newest addition joined our family. If life can have joy, this is it!

Carter has finally slowed his vertical assent and started rounding out his face and thighs (my favorite baby-fat pinching zones). At his one-month check-up last Friday he weighed 9 lb 10 oz and stretched out to 23 inches. That is the 50%-ile for weight and the 90%-ile for height. 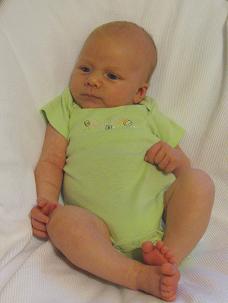 As a side note, Raine’s one-month stats were almost identical — she was just two ounces heavier. So it looks like we are on track to have another basketball player on our hands.

Raine’s favorite thing to do these days is give “wuvies.” Carter is the number-one recipient, but Mommy and Daddy get a lot too. 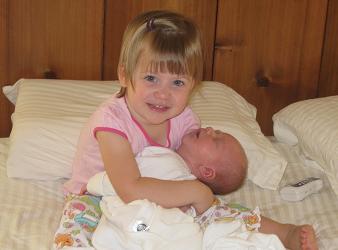 Despite being smooshed, smothered, and man-handled, Carter always seems to fall asleep when Raine is holding him. 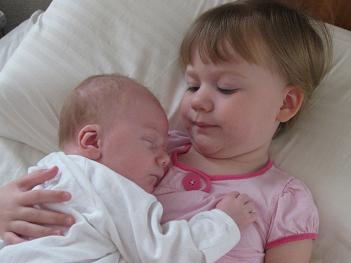 Grandma and Grandpa Anderson came for a visit last week and Raine had a ball while they were here! She wouldn’t let Grandpa out of her sight and constantly demanded that either he or Grandma “pay” (play) with her. Her favorite activities included the ABC and number puzzles, drawing pictures on the TV with Grandpa’s WiiMote, and stealing Grandpa’s phone. 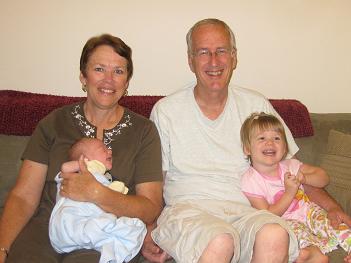 They brought the tent that I started making last year when Raine and I were in Phoenix visiting Great-grandma Anderson. Grandpa made a PVC pipe frame for it and I put the finishing touches on the trim and added the windows. Raine loves her new hide-out! 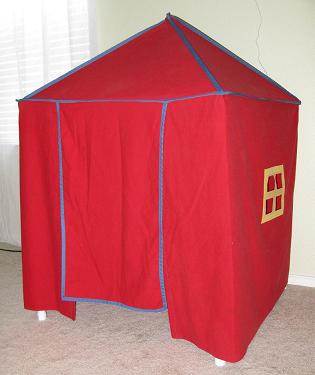 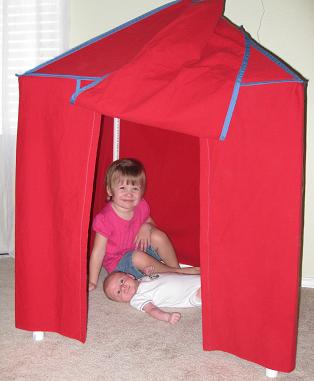 Raine received her first haircut while Grandma was visiting on Monday. (That smile is a result of the fruit snacks that I am feeding her.) 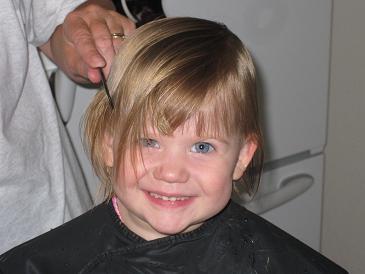 We took about four inches off the back and trimmed the top to blend it into layers. Now she REALLY looks older than she is! 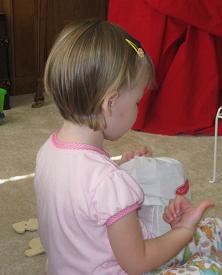 After a bath, Raine decided that it was Carter’s turn to have his hair done. 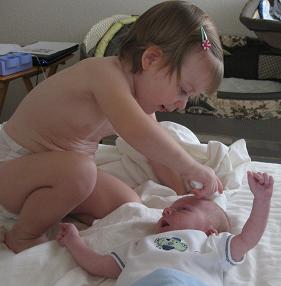