September 28, 2012
Raine, from the back seat of the car: “Why do some animals only eat dead animals.”
Me: “Well, don’t you only eat dead animals?”
Raine: “No, I don’t eat dead animals!”
Me: “What do you think was in those chicken nuggets you ate tonight?”
Raine: “Ummm, iguana?”
Me: “What!?!! No, silly. CHICKEN nuggets.”
Raine, with her best are-you-kidding-me face: “Chickens make chicken nuggets? Like eggs?”
Me, not wanting to traumatize her back into her vegetarian ways: “Um, yeah, something like that.”

November 30, 2012 – Super-cowboy and his trusty side-kick who thinks any day (or night) is the perfect time for shorts. 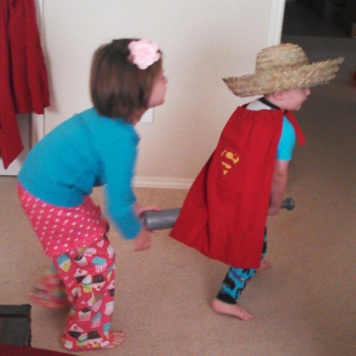 About two months later
Raine, climbing on the back of Daddy’s chair: “BALD!!! Daddy, you don’t need any more birthdays!”
Daddy: “Thanks Raine. I love you too.”

December 13, 2012 – I sent the kids in to brush their teeth and soon heard hysterical laughing and something about Carter sitting on Raine’s head. I went in and found this. Apparently they couldn’t find the stool. 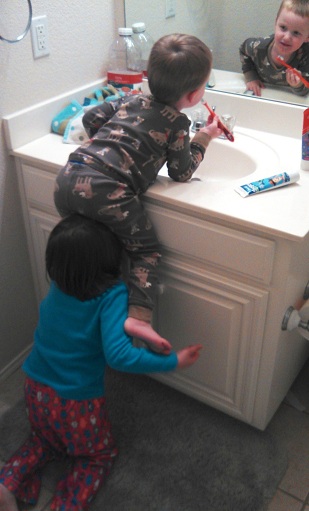 November 21, 2012
Raine, as we were stuck in traffic: “Daddy are you driving forward or backward?”
A big truck was in the lane next to us. Sometimes our lane was faster and we would pass it, then the truck’s lane would be faster and it would pass us — hence the confusion.

December 21, 2012 – Carter LOVES band-aids! Anytime he gets an owie, he has to have a band-aid on it — whether it is a scratch, bruise, bug bite, or really nothing at all. The problem is that he found the band-aids I keep in my purse, which are much easier to access than the ones in the bathroom, so he can help himself anytime. Apparently, he hurt his nose sometime between getting out of bed and coming in to wake me up! 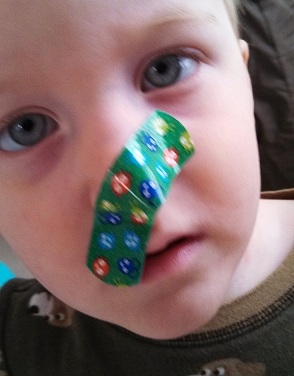 December 15, 2012
Raine: “Mom, Mom! Something terrible happened!”
Me: “What? What terrible happened?”
Raine: “I touched a spider on the door with a piece of paper and it ran away!”
Me, relieved that it really wasn’t anything serious: “Oh, gross.”
Raine: “Yea, I need you to vacuum it up.” 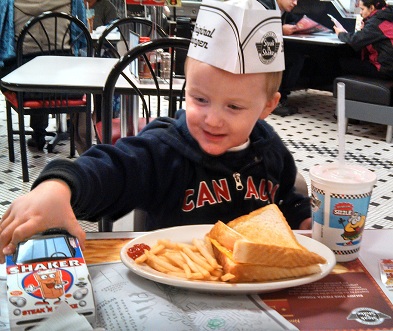 December 20, 2012
Raine: Mommy, the rooster is the chicks’ daddy.
Me: Yep, he is.
Raine: He protects the eggs while the momma is at the grocery store or at court or anything like that. So they don’t crack while the mom is away. That’s what daddys do.
(Hmmm, I think at some point this stopped being about the chickens!)

December 28, 2012 – SeaWorld didn’t open until noon so the kids watched PBS kids in the hotel room while we waited. They never watch TV and got so annoyed when commercials came on. Considering PBS only has commercials between shows, I’d hate to have seen their frustration during regular TV! 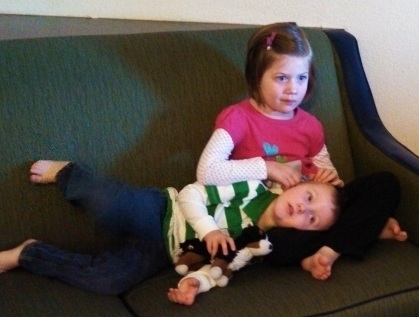 December 2012
Carter, coming up to me as I prepared to enjoy some yummy chocolate: “Is dat poop?”
Me, loosing my appetite: “No, that’s not poop! Gross!”
Carter: “Is dat dog poop?”

January 10, 2013 – Raine trying out her new roller skates. The protective gear arrived so she could finally skate outside . . . while holding my hand the entire time. At some point I caught an outside glimpse of myself in this situation and realized just how much life has changed from when I was a kid. I never owned a pair of knee pads, or even a bike helmet, when I was a kid. But now I won’t even let me kids off the carpet with a pair of roller skates on unless they are all “geared up.” Seriously! Am I raising my kids to be a couple of pansies!?!! 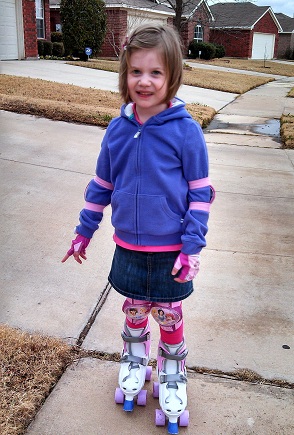 January 18, 2013
Raine and Carter were outside eating a picnic lunch in the warm January sun this afternoon. I went out to check on them.
Raine, very excited: “Mom, mom! I had orange stuck in my teeth and Carter stuck his finger in my mouth and pulled it out!”
Me: “Oh. That was very . . . nice of him.”
Carter just sat there looking proud of himself.

As I read back through some of these exchanges, I realize how much funnier it is with their little voices.