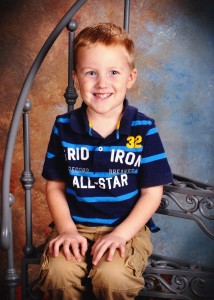 No, Carter is not a red-head, my scanner just didn’t do a very good job on the colors. 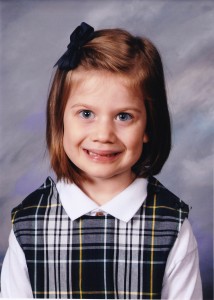 Believe it or not, these were Raine’s re-takes. We were really hoping for a more natural smile the second time around! 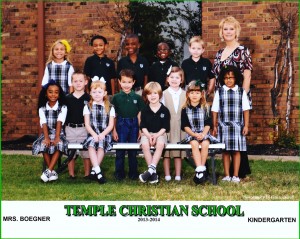 Fall Break officially started with a half day of school on Friday, Oct 11. That morning was grandparents’ day and Raine had a great time with her Grandma DeeDee. Raine adopted Grandma DeeDee, aka Sally Barnhart, a few years ago. Raine loved to make crafts — still does — and Sally loved to receive them. They have shared a very special relationship ever since. When we were trying to think of a good surrogate grandparent, I suggested Sally and Raine jumped up and down squealing “Yes! Yes! She will be the best grandma!” Sally was equally thrilled to fill the role and from what I hear, they had a great time.

When we picked up Raine from school, we headed straight over to the zoo for one last visit before our membership expired. “Fortunately” we arrived just in time for the zoo show, where Raine anxiously volunteered to hold the snake. 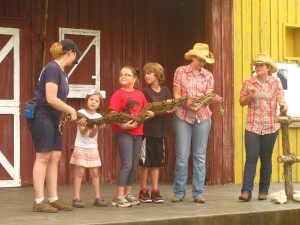 We made sure to see all our favorite animals, especially all the babies. We saw the baby jaguar for the first time. 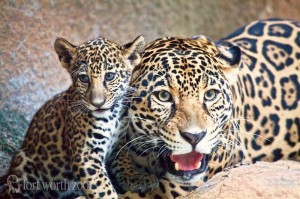 (My photos didn’t turn out so here’s one from the zoo.)

Everyone was feelin’ the love as we snacked on fudge and played in the barnyard! 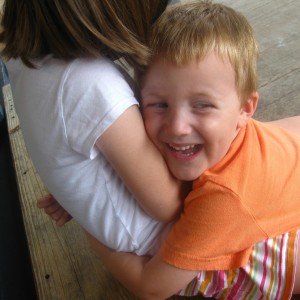 Saturday, one of Raine’s kindergarten-friends, Corrine, had a birthday party at Trinity River Farms. We got soaked by a downpour as we fed the goats and ended up waiting it out in the car. Afterward, we got all sorts of muddy as the birthday part resumed. The car ended up a muddy mess, but it was worth it to Raine to ride a horse and hang out with her friends. 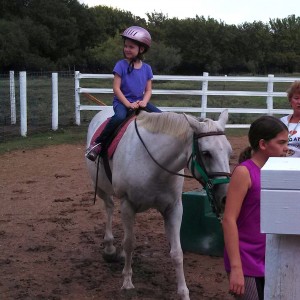 Wednesday we decided to take Carter to school and then head to the museum. This was Raine’s first time. She *loved* all the craft stations and opportunities to build something. Our backpack was full of crafts by the time we left! 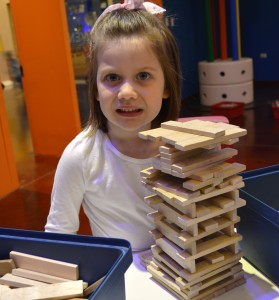 We also visited the new Curious George exhibit for the first time. There were plenty of fun things to explore there. 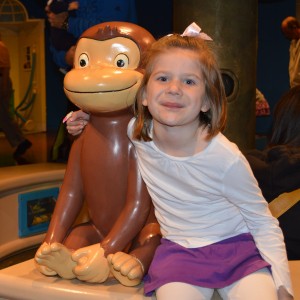 The rest of our week was filled with sleeping in late, home-cooked breakfasts, . . . 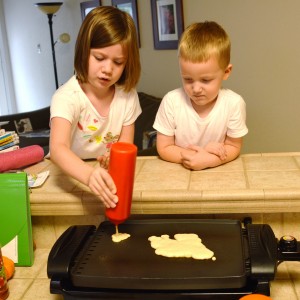 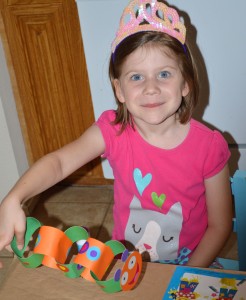 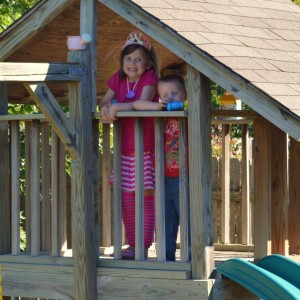 . . . flying around the house in nothing but fairy wings, a butterfly mask, and underpants! This girl is a *NUT*!!!

I LOVE hanging out with Carter! He is so much fun to pal around with while Raine is at school. He is very affectionate and a bit of a home-body — he is happy to play by himself… with his dinosaurs, in Raine’s doll house. (It is hilarious to listen to!) His goofy sense of humor always makes me smile! 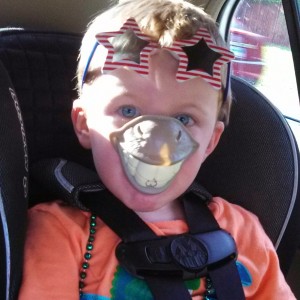 I’m not much of a home-body so I drag Carter out to playgroups every so often. He is infinitely more social than he was a year ago — I think the speech therapy played a big part in that. Once he figured out that other people could understand him, I couldn’t get him to STOP talking! The other day we were out for a walk with the neighbors and I had to do something that I NEVER thought I would have to do with Carter (it’s par for the course with Raine). I had to physically pick him up and have a little face-to-face about how he needed to STOP TALKING because no one else could get in a word! Having said that, Carter despises playgroups when there are more than a couple kids running around. He will park himself on my lap or hug my leg and refuse to play. I can’t figure it out, but I really like him so I don’t mind!

Carter is having a hard time giving up naps. He will take a nap whenever and wherever he feels the need. Riding in the car puts him out in the afternoons. Eating dinner, or even a snack, will do it too. Then there are those days when he just climbs onto my lap and falls asleep without a word. 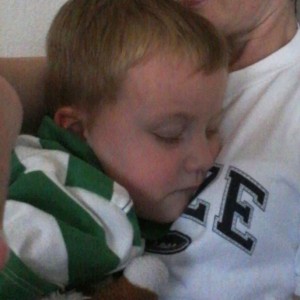 The problem comes at bedtime. If he takes a nap, of any length, he can’t fall asleep before ten. So he comes out of his room, over and over, until I finally give in and let him stay out with me so he doesn’t wake up Raine. He knows I can’t resist his little puppy-dog eyes and he uses them to his advantage — he knows they’re especially effective when DJ is out doing Bishop stuff! He will get himself a whole stack of his favorite books and then snuggle down in my bed so I can read them to him. Am I enabling a very bad habit? Absolutely! Do I care enough to stop it? Not even close!

Here are some photos from a recent playgroup outing to the zoo. 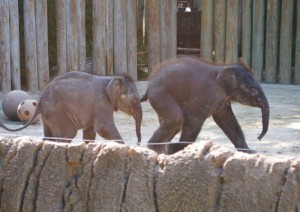 This was the first time we had seen the two baby elephants. 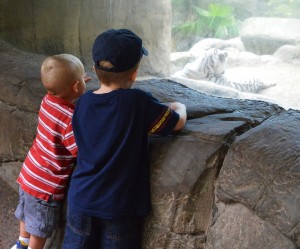 Carter and Hudson (or “Hudsy” as he calls him) watching the white tiger. 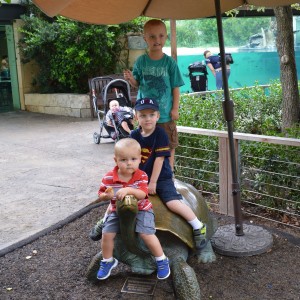 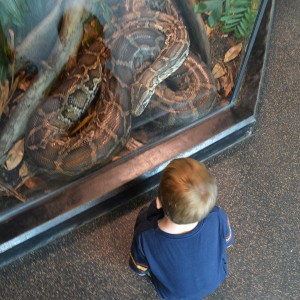 “Do not be afraid, Man Cub. Trussssst me.” 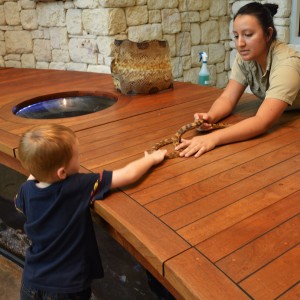 We decided to let our zoo membership expire and get a membership to the Fort Worth Museum of Nature and Science instead. Carter calls it the dinosaur museum because it has an exhibit of dinosaur fossils and interactive activities as well as an outdoor dinosaur dig. Needless to say, he loves it! 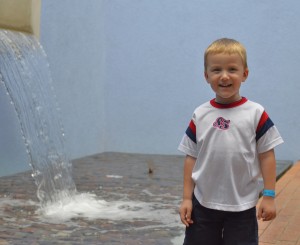 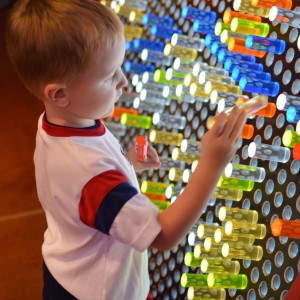 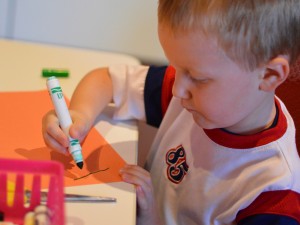 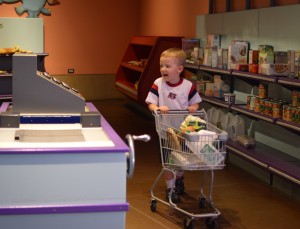 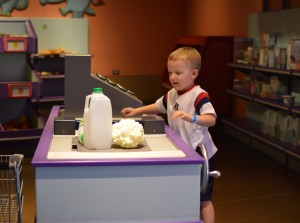 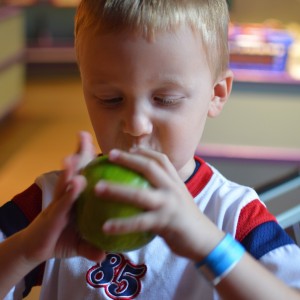 Carter’s favorite part of the museum is the wind-energy room. He is OBSESSED with paper airplanes and can’t get enough of the launcher — fortunately, Momma has some pretty good paper-airplane-making skills! 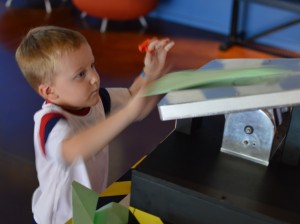 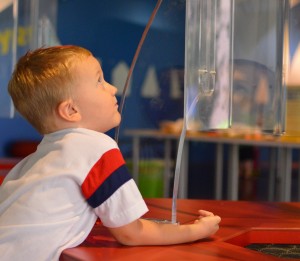 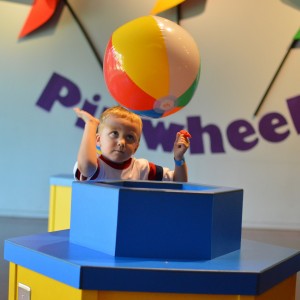 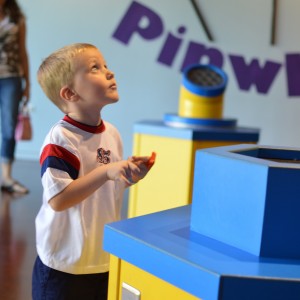 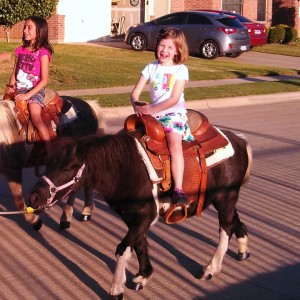