After two months of negotiating, financing, closing, painting, and packing, we are finally moved into our new home! 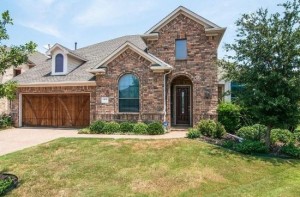 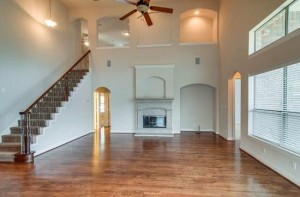 We like this house because it is close to a top-rated elementary school AND middle school. The kids can walk to school for a lot of years! The house also sits at the end of a quiet little cul-de-sac and has plenty of room in the backyard for the kids to play. Another one of my favorite features is the multitude of closets — something our old house lacked — I am very excited to fill up every one of them!

Raine and Carter’s only requirement was that the new house have an upstairs, this one fit the bill with a “Texas basement.”

We visited the Center for Animal Research and Education (CARE) this weekend and it was AWESOME! When I read in the newspaper that this big cat sanctuary was having a fall festival, I knew it would be perfect for Carter. He has been obsessed with big cats for the last little while and lately has been sporting this little get-up every chance he gets. 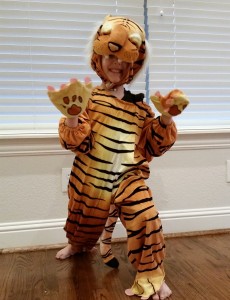 He’s even made more than one trip to the store wearing it — although, I’ve successfully negotiated with him to leave the head-piece and gloves in the car so he doesn’t scare anyone. He wears this thing constantly at home and anytime he doesn’t like what I have to say to him, he roars at me! He really gets into character.

Saturday afternoon we loaded up the car and drove to Bridgeport. There were games for the kids to play while we waited for our tour to start. One of the activities was painting boxes — a perfect activity for crafty Raine. 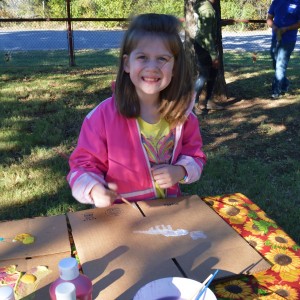 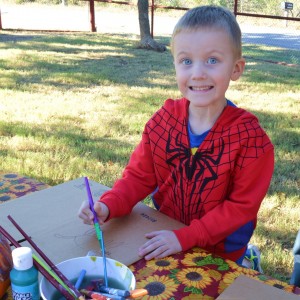 And what were the boxes for? Well, we dropped a chicken leg inside, closed the top, and then threw it over the fence to a waiting tiger! 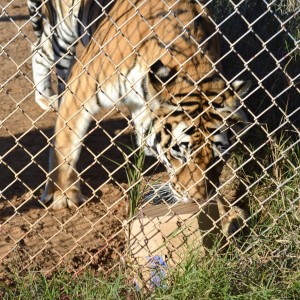 This guy quickly tore open Raine’s box to get to the chicken and then laid down to finish tearing the box to shreds. It was AWESOME! 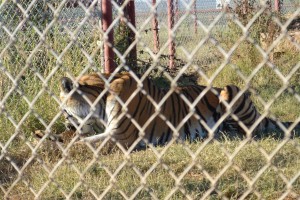 Raine loved it, but Carter decided that he didn’t want a tiger tearing up his box so he brought it home to play with himself.

There are 40 big cats at the sanctuary and the tour took about an hour and a half to see them all. The kids were riveted the entire time. They learned all sorts of things about tigers, lions, cougars, and leopards. The cats were only about three feet away, with just a chain-link fence between us and them. A number of them kept their eyes on the small children in our group; here is one particularly large male who was more interested in Carter than the pumpkins in his pool. It was a little disturbing!

Did you know that the darker a lion’s mane, the more intimidating he is to other lions? 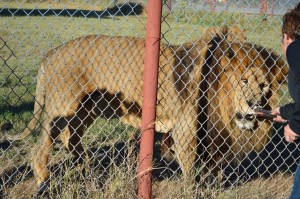 Did you know that a cougar can’t roar? Carter knew that one because he LOVES cougars — and he’s obviously never been to a BYU football game. 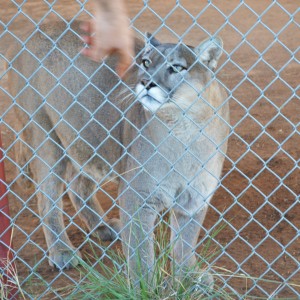 This girl loves to show off. Terrible photo, but she is scampering from one platform to another on just that three-inch wide support bar. 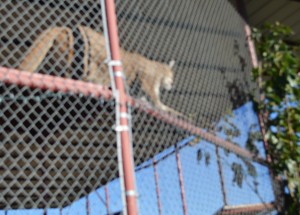 The black leopards don’t photograph well, but they look really neat in person.

They also have a rare snow leopard at the sanctuary. We saw him . . . sitting by the fire in the living room of the house watching his favorite movie, “How to Train Your Dragon.” I wish I had gotten a photo of it. He had just taken a bath and would get too cold outside because he is a Texas native and can’t handle the cold!

You don’t realize how big these cats are when they’re walking around on all fours. I started wondering if these fences were really high enough after seeing this demonstration. 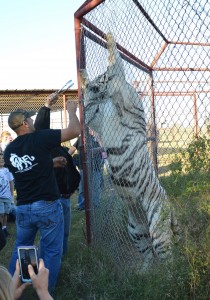 I kept trying to convince the kids to pose in front of one of the tigers, but they had a hard time taking their eyes off long enough for me to get a photo. 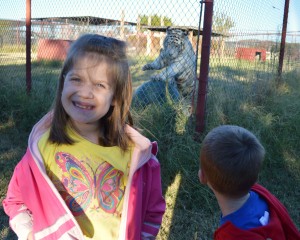 The baby lion cubs were adorable. 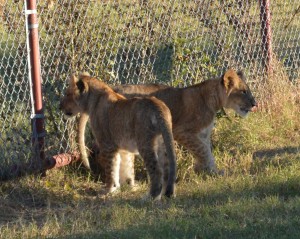 Did you know that lions only weigh about two pounds when they are born? 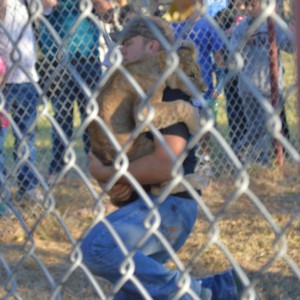 They also have a large family of lemurs at the sanctuary. 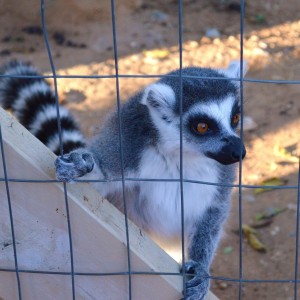 Watching the tigers bob for pumpkins was a lot of fun. This is a video that our tour guide took, you can see Carter (in a red sweatshirt) and me (kneeling) behind the tiger.

The last stop on our tour was the tug-of-war area. Daddy decided to try his hand against JP the tiger. JP knew what he was doing. He would pull a little at first and then just hold it while everyone took their photos. When he got ready for some chicken he would start backing up, dragging everyone on the rope along with him.

Raine’s class took a field trip to the Botanical Gardens this past Friday and I was able to tag along. 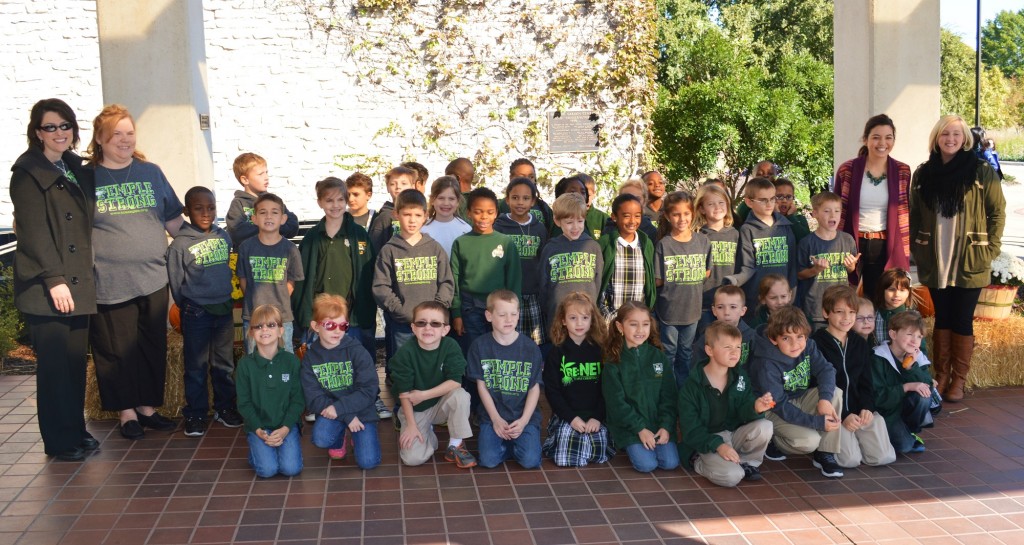 Four parents came along to help with kids so we each only had two or three kids to keep track of — I had Raine and her current BFF, Belle. 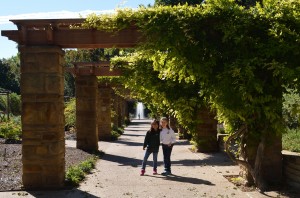 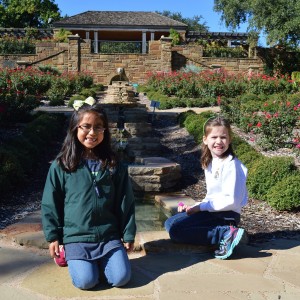 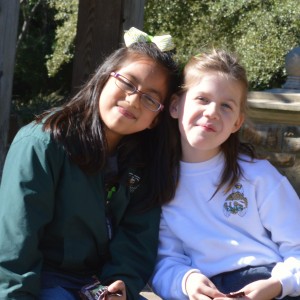 Play house in the vegetable garden 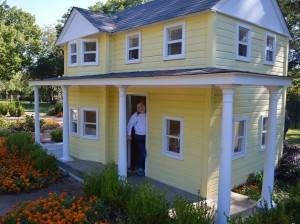 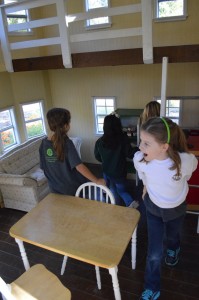 The girls in Raine’s class call themselves the cool cats — they have songs and cheers that they practice during recess. This is their “cool cats” pose. 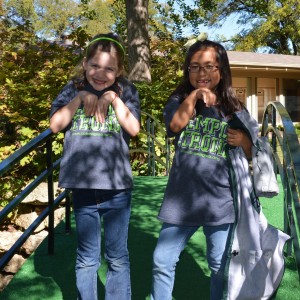 Wednesday was the ward trunk-r-treat. 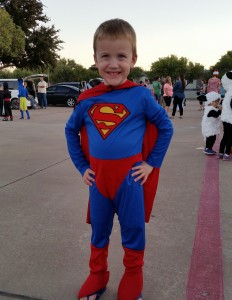 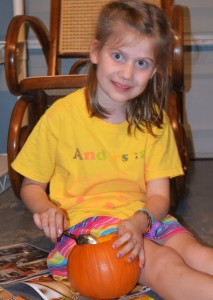 Friday was the big day. The kids went door-to-door with Alice, their little sister from across the street. 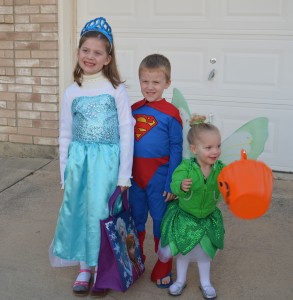 Every year, our neighbors bring their horse in to give the kids rides by the lake. Raine is always up for riding a horse. 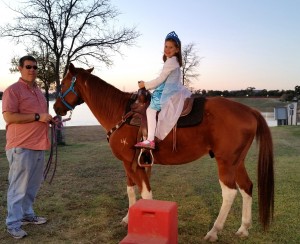 I couldn’t believe it when Carter said he wanted to ride too. This is a first for him. 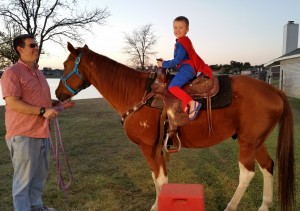