We have been avoiding major organized sports for the kids for a while, mostly because there wasn’t a league close to our house and I didn’t want to be tied to a schedule that included a lot of driving. Now that we have a program only about a mile from us, we decided to sign up both kids for soccer. Neither of them has ever played on an organized team before, and as parents we have completely failed to teach them anything about this great game, so it has been fun (and funny) to watch them jump into it and try to figure out what is going on!

Saturday, after a mere two practices, they each had their first game. Raine’s team, the Rockstars, played the Divas. Raine played significantly better than I expected. On the field, she is just as timid and polite as she is off the field — she always waited her turn to kick the ball, never stealing it from anyone! But she had a huge smile on her face the entire time and loved running with the pack! 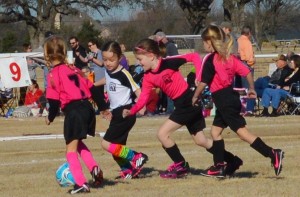 Raine is easy to spot on the field because she is the tallest. They use the kids’ age on Sept 1, so she is playing with the kindergartners, rather than the 1st graders that she goes to school with. As far as playing ability goes, this is great for her, but it reminds us just how tall she is! 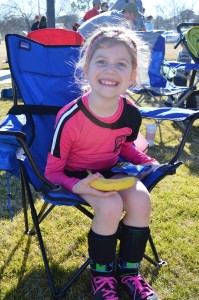 Carter’s team, the Great White Sharks, played the Believers. Carter was just happy to be playing; if he gets a chance to kick the ball, that’s just a bonus. His team plays on a tiny field with just 3 players from each team on the field at a time. The coaches for both Carter’s and Raine’s team are on the field the entire time getting their kids in the right places at the right time — it is a great way to do it because it teaches them how to play the game as they go along. 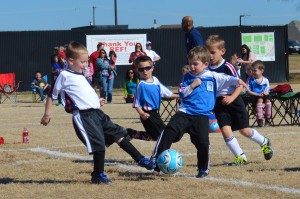 Daddy is the assistant coach for Carter’s team so they get to enjoy the chaos together! 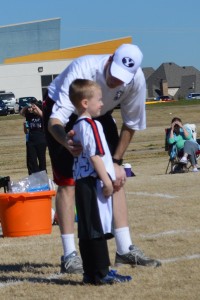 He had a pretty serious game face . . . too bad he doesn’t have the skills to back it up! 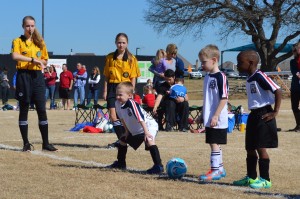 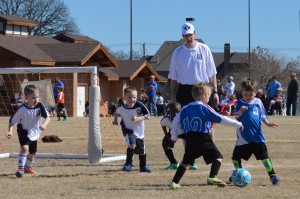 At this age, just keeping them focused on the game is half the battle! 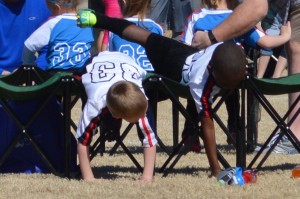 Highlights from Carter’s game (he is the one with a white stripe down the side of his shorts):

As I sat on the sidelines cheering for the kids, I found that every time I opened my mouth, my mother came out! She coached my soccer team all through elementary school so she is deeply ingrained in almost all of my soccer memories. I tried to at least keep my mouth shut while I was taking videos, but I just couldn’t keep it in at the end of Raine’s video! I’m surprised I still have a voice after all the yelling I did yesterday!