Before I get into Carter’s days as a superhero, I wanted to post this photo from his first day in Primary. He’s a Sunbeam! 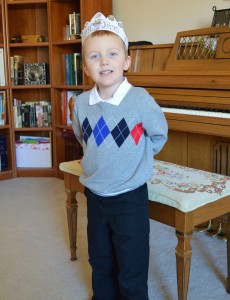 Carter loves his teacher, Sister McCallister; she brings “loopty loops” (fruit loops) for them when they behave. Of course he’s an absolute angel in there — our kids always are . . . at church. That reminds me of something that happened the other day: Carter and I were out with a couple friends and Carter started throwing a fit because I didn’t do something exactly like he wanted me to. As I worked through his little melt-down, one of the other moms started laughing and said, “I’m so glad to see that your kids throw fits too!” I understand that other people only see our kids at church and think that they act like that all the time, but if you spend enough time with us, you will see AMPLE evidence that that just isn’t the case! But still, I appreciate the compliment. It’s nice to know that for three hours every Sunday I look like I have it all together!

Alright, on to Carter’s superhero obsession. It started back in December with Superman. He would wear one of his two superman t-shirts, along with his cape, EVERYWHERE we went! Everywhere except school and church. I talked him out of wearing it to those two places by reminding him that superheroes needed to keep their identity secret. So like Bruce Wayne and Clark Kent, Carter goes to school as just plain old Carter. Granted, he still wears his superhero shirts, just not the capes.

Around the beginning of the year, he got into Batman. One Saturday night he was talking about Batman non-stop. So after his bath, I pulled up a classic Batman episode from the 1960’s and let him watch it. That was it, he was hooked! After church on Sunday he begged me relentlessly to make him a Batman cape. I kept telling him that I couldn’t make one right then, until finally, inspiration struck! I pulled out an old black tank-top and tied a cord through the shoulders to make a cape. I wasn’t sure how he was going to respond to my make-shift cape, but he LOVED it! He wore it all that day and the next morning. 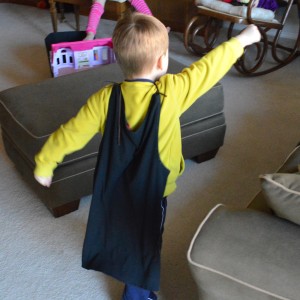 Here is a video of Carter running around in his Batman cape.

First thing Monday morning, Carter and I headed down to the craft store so we could make him a REAL Batman cape! For under $5 we had a good looking cape and t-shirt. 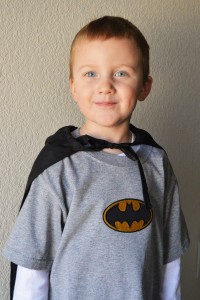 Just for the record, Carter was playing with baby dolls the entire time I sewed his cape. At some point, in complete exasperation, I found myself saying, “Carter, do you want me to make you a Batman cape? Or put diapers on your babies? Because I can’t do both!” He chose the cape! 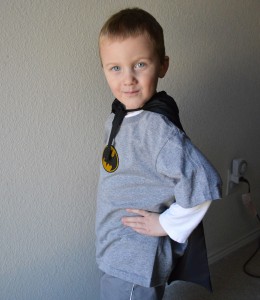 Raine needed in on the fun when she got home from school, so she whipped up this Batgirl outfit for herself using one of the logos that I had printed. 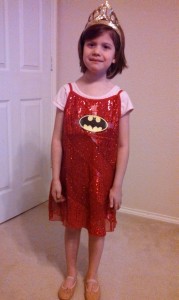 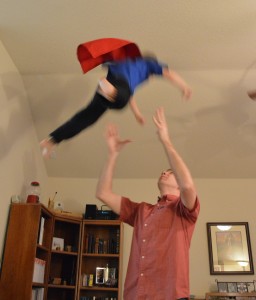 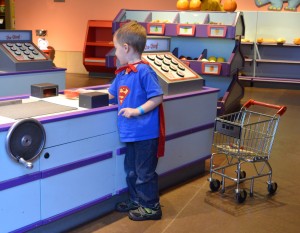 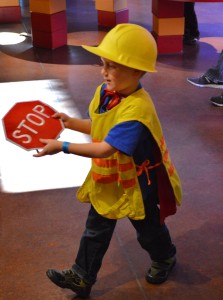 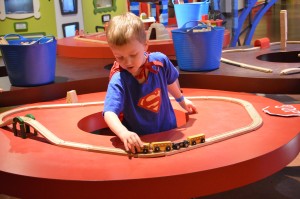 1/29/14 – He kept trying to convince me to make a Batman mask for him that went over his head, but I assured him that that was way out of my league. One day he found this cardboard mask, left over from a RS activity; once he got it decorated, it was perfect for him! 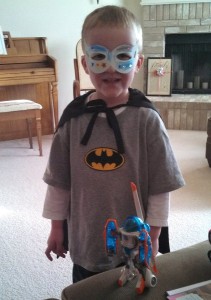 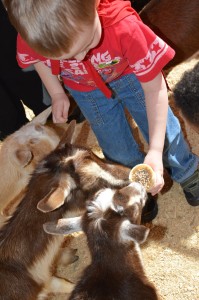 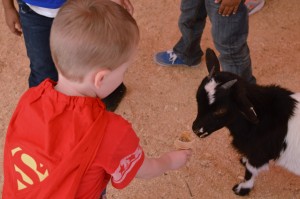 You know it’s a superhero-sized corn dog when you have to fully extend your arms to get it into your mouth! 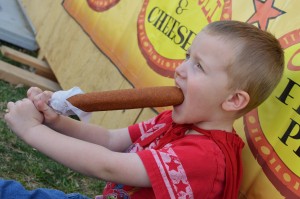 Yes, it’s been a good month for this little superhero!