Carter had his last speech therapy session on Tuesday. Less than three months from when he started, he is now speaking at age level. He has come a long way in this short amount of time and it has made such a difference in everyday life. I love being able to understand his needs, wants, and especially the random ideas that cross his little two-year-old mind!

Here he is with his speech pathologist, Sandra Heaslet. 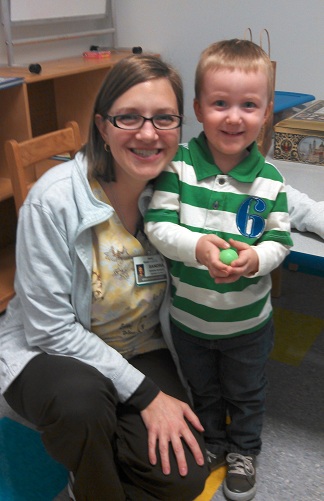 Carter worked extremely hard to learn his sounds. (His problem was terminal consonant deletion, he didn’t put consonants on the ends of his words.) I was so proud of him when he worked hard to get it right. He didn’t get frustrated and give up — which he is prone to do sometimes when he can’t get something to work right. Seeing him work so hard has made me confident that he will be very successful in life — not because he is exceptionally smart, but because he will put in the effort to work through problems and accomplish his goal. I hope he continues to develop this trait — a trait he definitely got from his dad!!