Saturday afternoon was Raine’s Spy birthday party. Ten of her friends from school came to help celebrate. The party was a month after her birthday because I had a hard time coming up with ideas to go along with the spy theme. Eventually, we come up with a list of games to play here at the house. These were the invitations. We printed them on fancy, marbled paper and mailed them off in matching envelopes, sealed with a red “Top Secret” stamp. They looked official!

When the guests arrived, they had to select an agent file which listed their new code name — Raine’s was Silver Ninja. They also had to get their fingerprints taken for a game that we played later. 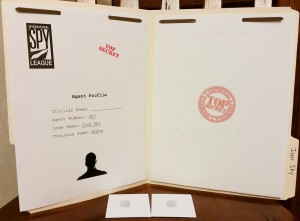 While we waited for everyone to arrive, they decorated neon colored fedoras and sunglasses. Then they split into two teams, Alpha and Beta, and tried to match the fingerprint cards of the other team the fastest. 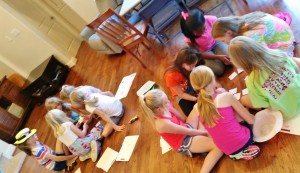 Next was the encoded scavenger hunt. They had to use the cipher provided in their folders to decode each of the clues. 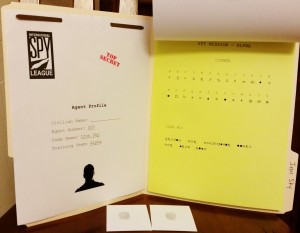 Here is team Beta working on a clue. 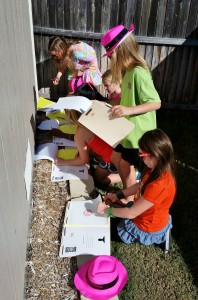 And team Alpha working on their clue. 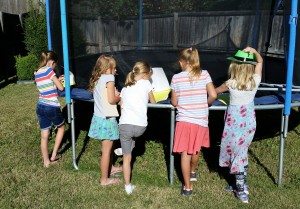 After the scavenger hunt, they did the laser challenge. We strung “lasers” with bells on them all over the shed and then put bracelets in the back corner that they had to retrieve without sounding the “alarm.” 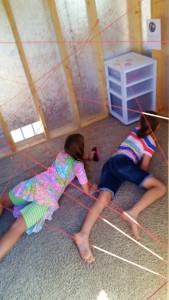 After the lasers was disguise training. Each team had to dress up one of their teammates faster than the other team. 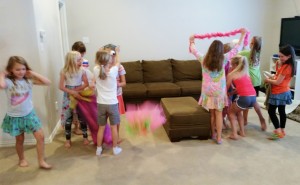 Team Alpha won every single challenge. The teams were determined by the folders the girls selected but despite having one more person on team Beta, they came in behind team Alpha every time. 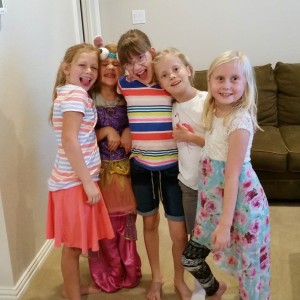 The pizza arrived and our kitchen became a melee of eight-year-old girls. They sang happy birthday and ate cake. 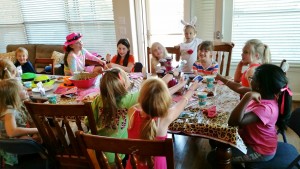 Then Raine opened the presents. 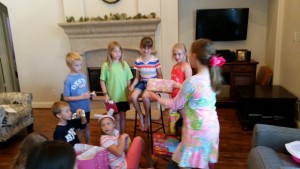 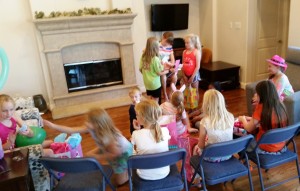 Raine had a blast at her party but Daddy and I renewed our vow to never have a birthday at our home. I have always preferred hosting it somewhere else, but the spy theme didn’t lend itself to any of the usual birthday party sites. After the insanity that reigned at this party, I have committed to never do this again!