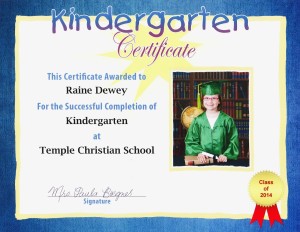 Raine’s kindergarten class has been working hard on their play for graduation — memorizing lines, learning choreography, and practicing songs. The much-anticipated event finally arrived on Thursday.

But first, Raine came home with a second honor eagle award! The award is only presented six times during the year, recognizing a student who exemplifies the five R’s of behavior (respect, responsibility, relationships, righteousness, and reliability). Receiving it twice in the same year is quite a statement about Raine’s character! 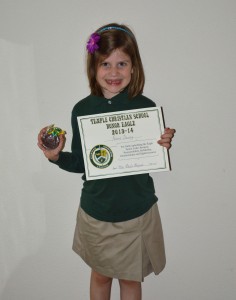 That evening Raine put on her costume and we headed back to the school for the ceremony. 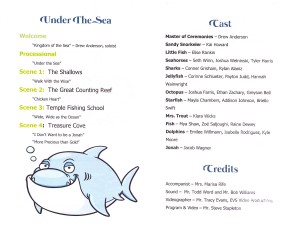 The play was titled “Under the Sea” and was about a snorkeler who was looking for the pearl of wisdom. It was full of fun songs, all adorably choreographed, and plenty of excited kindergartners! 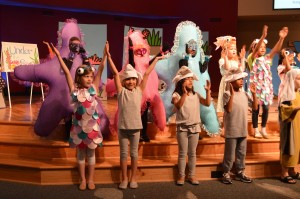 My favorite was the “chicken heart” song. (Unfortunately, our videographer, aka Daddy, failed to hit the record button on that one, so we only have still shots. When I get the DVD from the professional videographer, I will try to upload it.) 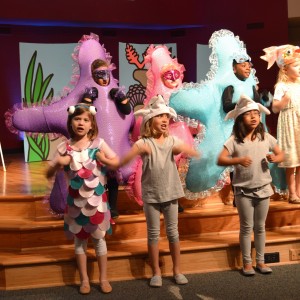 Raine was Cindy Snapper, in the Temple Fishing School. Here she is during her scene. I’m pretty proud of how well her and Zoe’s costumes turned out. Zoe’s mom and I worked on them together — she cut out all the scales and I sewed them to the shirts. 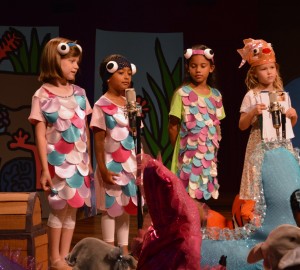 Below is a seven minute video showcasing snippets from a few of their songs as well as Raine’s lines in the play. Here are the lyrics to all the songs (as remembered by Raine). They are such precious lyrics and brought the sweetest spirit to the program.

While the kids changed out of their costumes, we watched a slideshow of photos from all the activities they did during the year. It was fun to see just how much Raine has matured during kindergarten . . . and how many teeth she has lost!

The kids came back in wearing their caps and gowns and received their diplomas. 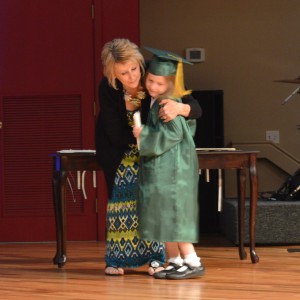 Next, Mrs. Boegner handed out six achievement medals — for bible, conduct, numbers, math, writing, and reading. Raine received the medal for conduct — no surprise there!

She also received the medal for reading. We were really surprised by that. Raine is a fantastic reader, but we didn’t realize that she was the best reader in her class! 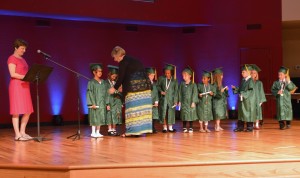 She was very proud of her two medals. 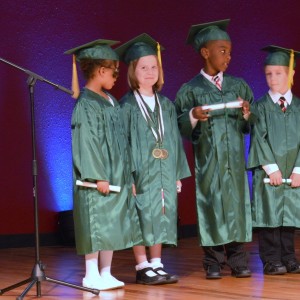 Each student received a certificate recognizing a trait that they share with a bible character. Raine received the Priscilla award for being a “teacher by example.” 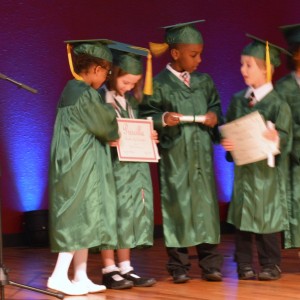 Raine’s teacher, Mrs. Boegner, received the teacher of the year award. She is a fantastic teacher and Raine really loved her. Mrs. Boegner knew how to make her feel important and made Raine always want to do her best. 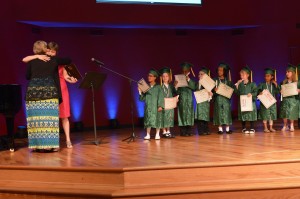 We picked up a very happy Raine back in her classroom where we took some photos and turned in her robe. 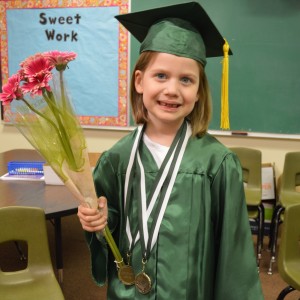 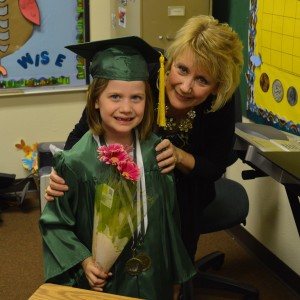 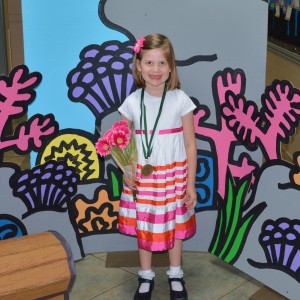 I’ll be honest, when I first learned about kindergarten graduation I rolled my eyes with a dismissive “Seriously!? Why do kids have to ‘graduate‘ from EVERYTHING! She’s still going to be at the same school next year!” But in the end, I was very glad they held it. The play was so polished and well done and it was such fun to see Raine receive awards for her hard work this year. It really started off her academic career in the best possible way. She loves school and has all the confidence in the world that she can succeed at anything she tries. We walked out of there full of joy and pride and so thankful for the wonderful teachers Raine had this year!

One thought on “Raine’s Kindergarten Graduation”