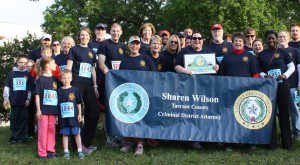 Carter ran his first road race on Saturday, April 11, at the Victory Over Violence kids 1k (it was Raine’s second race). The District Attorney’s office had a team participating in the event so we joined. 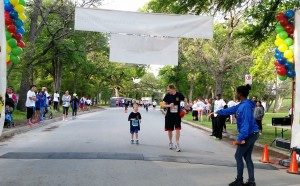 After the 1k fun-run, the kids and I took off for soccer games while Daddy ran the 5k. 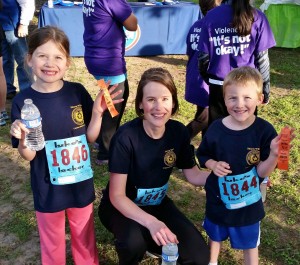 That conversation made me really wonder what the best approach is when it comes to kids and competition. Should everybody be a winner? Or should kids be allowed to lose? Both approaches have advantages. When kids are little, it’s great to encourage them and build their self-confidence by making them feel like a winner even if they weren’t the best or fastest. But at some point, kids need to learn that sometimes (most of the time) other people are better than they are at certain things. It will drive them to either try harder or find something else that they are better suited for. Kids know when they aren’t the best so why take away the “consequences” and raise them to believe that they are entitled to a prize even when they didn’t earn it?

I’ve never considered myself a competitive person, but I’m all for keeping score at a soccer game… no matter how old they are!