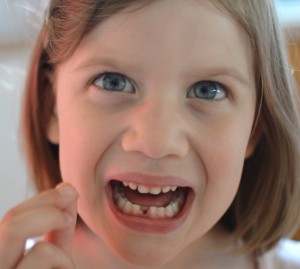 That night, she left it for the tooth fairy on a shelf above her pillow and awoke to find THREE dollars in its place! 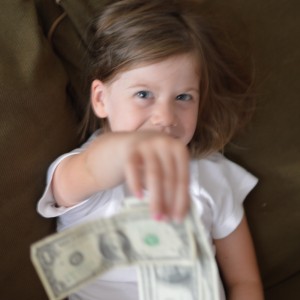 The tooth fairy has since learned that, although inflation has increased the value of teeth from the 75 cents she received as a kid, it has not increased to three dollars. In her defense, the tooth fairy inadvertently fell asleep prior to making the exchange and was a little out-of-it when she jerked awake at 5:00 am fearing that she would fail her first opportunity to serve in this role. She was also feeling a little generous since this tooth saved the fairy $149 — the price quoted by the dentist to pull it out at 8:30 am that very morning, August 8.

Instead, the dentist just pulled Raine’s other bottom-front tooth for half the original quoted price! (You can see the permanent tooth half grown-in there behind the first one, that is why the extraction was scheduled for both teeth.) The tooth fairy’s dear husband took care of the exchange of the second tooth and again left three dollars, so we may now be locked into that rate . . . we’ll see how well she remembers when it comes time to do it again.

Hopefully Raine won’t be loosing too many more teeth anytime soon. Four-years-old is quite young to be loosing baby teeth — the pediatric dentist we went to said this was definitely one of the earliest he has seen. I think Raine just wants to make sure she fits-in when she starts Kindergarten next week! 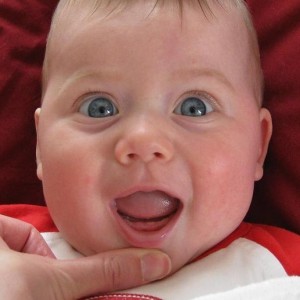