Raine had her annual checkup today. She is 42 lbs (90%-ile) and 43.5 in. (above 97%-ile).
An interesting side note: my mom recorded a few of my growth stats in a journal — okay, so there was really only one entry, but that one just happened to be when I was the exact same height and weight as Raine is now. The big difference was that I hit that size three weeks before my fifth birthday and Raine hit it a week after she turned four! 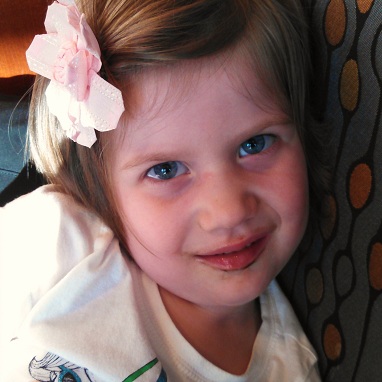 Quite a while ago we decided to send Raine to private school so she can start kindergarten next year, rather than waiting until she meets the public school age requirement. We hadn’t mentioned this to the pediatrician and so were surprised when she suggested that we start Raine a year early. Raine won’t have the issue of looking younger than her peers and she certainly has the cognitive skills to handle it. The doctor was very impressed with her drawing skills during the accomplishment screening — she drew a perfect triangle and a lovely picture of me, among other things. It was nice to hear that a trained professional thinks she is as smart as we do!

After that, the nurse proceeded to use Raine’s legs as pin-cushions, immunizing her against every illness known to man. Poor Raine had more band-aids than exposed skin when she walked out of there, but she handled it like a CHAMP! This girl is tough as nails — unlike her mom who used to turn green and sink to the floor after even the smallest shot!

A funny side note: after the nurse took all of Raine’s vitals, she asked me to help her pee in a cup. I got Raine into the bathroom and tried to explain what we were going to do . . . but Raine just looked at me like I was INSANE! That was the most ludicrous, neanderthal thing she had ever heard of and there was NO WAY that she was going to put her pee into a cup for someone else to look at. The absolutely appalled look on her face made it impossible for me to negotiate with her with a straight face . . . and so I lost that battle and we returned the empty cup to the nurse. Maybe next year.