She never wavered in her determination to dance with the lizard, so I booked the party. I didn’t want a huge party so we only invited a few of her closest friends from church and school. They started out jumping on the inflatables.
Raine, Carter, Zachary, and William 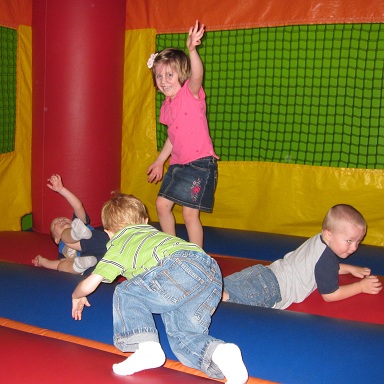 Finally, her big moment arrived . . . Ziggy was in the house!
Elyse, Carter, Daddy, Raine, Ziggy, Hudson, Boston, and Cade (some of the kids were a little leery about that big lizard and didn’t want to get too close) 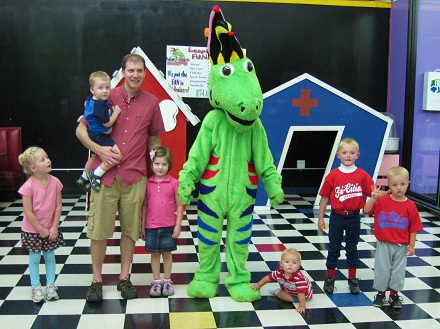 Can’t you see the excited anticipation on Raine’s face? She obviously hides it well. Talking to her about it afterward, she told me that dancing with Ziggy was the best moment of her life — she was all smiles and animated. In the moment however, she was all business.

After the dance we retired to the party room for some pizza and cake. 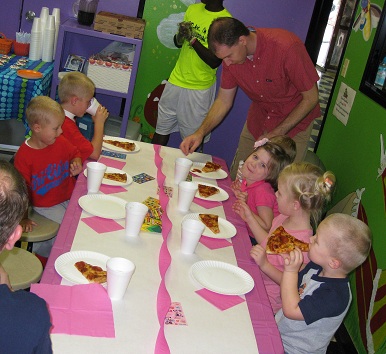 Then they inflated the giant throne for her to sit on as she opened the presents — she thought that was pretty neat. 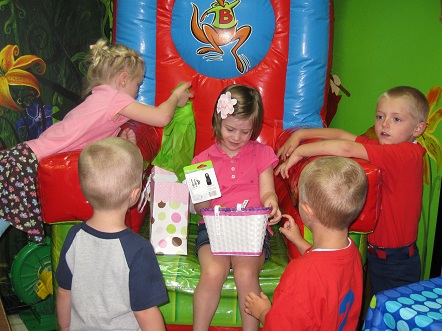 Here are a couple video clips. In the first one, watch Carter’s nose as he gets to the bottom of the slide. The second one is Raine’s big moment — unfortunately, cut short when the camera ran out of space on the memory card. The third one is her with all her party guests.