On February 12, the Friday of President’s Day weekend, Carter had surgery to insert ear tubes and remove his adenoids. He had three consecutive ear infections from Sept to Nov and his ears were so gunked up that he could hardly hear. The ear tubes were to give him immediate relief from the deafening ear gunk while the adenoid removal was to help prevent future buildup.

Carter was in a bad mood when got to surgical center because I had inadvertently scheduled the surgery on the day of his class valentine party. He had been talking about it all week so I didn’t have the heart to tell him that he was going to miss it! We had to be at the surgical center in Plano by 7:05 a.m. so we simply picked up Carter out of bed and put him the car. He didn’t ask where I was taking him until we arrived at Cook’s, but then it was too late to protest. I realize this sounds like terrible parenting, but it really was the best method for this particular child. He would have gotten himself too worked up about it if he had known ahead of time. This way, by the time he knew what was happening, it was too late for him to get worked up. He just took the medicine and played video games until it was time for him to go back. 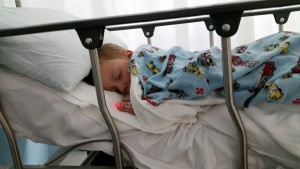 After the procedure, he woke up with a raging headache. The nurse quickly gave him a dose of hydrocodone, but the 20 minutes until it took effect were torturous. Once the narcotics were working, he dozed off again while I listened to the post-op instructions. Not long after that we headed home with a whole stack of prescriptions.

Carter decided that he had been medicated enough that day and refused to take anything else. We started negotiating and the winning bid was . . . a quarter! (You just never know what will strike this kid’s fancy.) Friday afternoon he took some ibuprofen and that night before bed his headache was returning so he took some hydrocodone, but that was the last painkiller he took. Saturday it was hard to tell that anything was different and by Monday, he was running and playing like nothing ever happened. 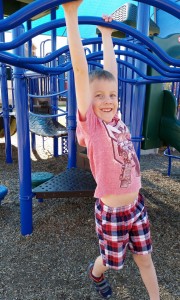 Here he is on Monday showing me how he does the monkeybars at the school playground. Then we went on a 2+ mile bike ride down the Cotton-belt Trail.

When Carter went back to school on Tuesday, he swore to his teacher that nobody had put tubes in his ears. He was adamant that nothing had happened after he fell asleep at the surgical center. He couldn’t be convinced until I showed him the picture of his adenoid that the surgeon had given me. He thought it was pretty cool to have a picture of the inside of his left nostril! 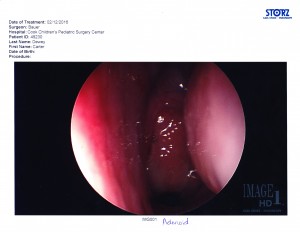