Raine and Carter have been participating in Destination Imagination this school year and they had their performance/competition on Saturday, February 20. There is a large regional DI tournament down in Grand Prairie but their team (and the other team at their school with kids this age) decided to simply do their own instead. The event was held at White’s Chapel.

DI is all about developing problem solving skills and creativity. At the beginning of the year, the kids are given a challenge for which they must create a play that meets the given criteria. They also participate in instant challenges which they have never seen before and must solve in 8 minutes. The criteria for their play included things like having props, including a map with a compass rose; the story must represent a journey and include at least one change of direction; they must also develop characters.

The adult team managers can teach the kids skills but cannot influence how they solve the challenges. This lack of adult influence is very apparent in the final outcomes! Take for example their team name: Halloween Thinking Hooties! Their play absolutely represented their individual personalities — Raine is obsessed with being a detective, Carter loves being a tiger, and little Oliver loves Bigfoot.

Here is their team, being introduced by the regional representative who ran the event. 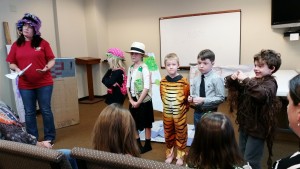 Here is their play:

The instant challenge required them to make an animal using the materials provided (clay, pipe cleaners, popsicle sticks, etc.). They had to come up with a name for their animal, be able to explain how their animal ate, and how it made friends. Carter opted out of the instant challenge because he was hot, hungry, and tired of being there (we sat there for over an hour watching the other team participate in instant challenges and I’ll be honest, it was painful even for an adult). 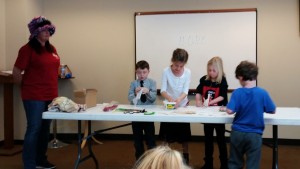 Here is Raine describing her “snizzard.” It is a half-snake, half-lizzard creature that catches its food in a sticky, umbrella-like structure on its back; it then licks off the captured insects with its tongue. Snizzards make friends by putting on a show (it had colorful feather plumage on its back end).

After the instant challenge, they were each recognized for their participation. Carter was the only kindergartner in the group. The other two boys are both in 1st grade and Raine and Makenzie are both in 2nd grade. 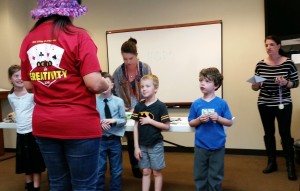 Here is a video of them receiving their awards:

One thought on “Destination Imagination”