We didn’t have any big plans for spring break this year, and it turned out to be a good thing that we didn’t! Saturday morning, I woke up to the sound of Carter puking. Good thing Daddy hadn’t left for his morning bike ride yet and saw the signs of Carter’s impending up-chuck. He got him into the bathroom before Carter covered everything and everybody in yuck!

Carter’s tummy trouble only lasted that morning, however, Sunday he woke up with pinkeye. There was no way that we could take him anywhere near church, so he and I stayed home. The funny thing was that Carter felt perfectly fine; he just looked scary! The sun was shining and the temp was in the upper 70s so we took a trip to the playground while Daddy and Raine were at church. 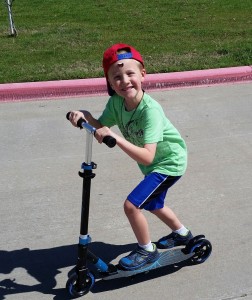 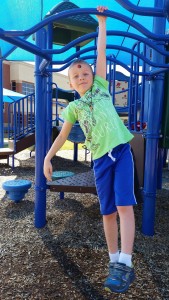 Monday we still didn’t feel like we could take Carter anywhere with kids, i.e. KidzU, so we made arrangements to stay home with them. Daddy had a meeting in the morning so I stayed with them while he was at work, but I had a trial in the afternoon so Daddy rushed home at noon to swap with me. It was spring break, gorgeous weather, and the cleaners were in the house so we headed over to Kidsville. I was there in my dress and heels, reading affidavits on my tablet, while the kids had a picnic and played hide-and-seek — real 1st-world problems, I tell ‘ya!

As soon as I got to the courthouse, I started to not feel so great. The newest attorney in my office was already at the courthouse and said that she was thinking about coming to watch my trial. I told her that would be a good idea because then if I had to puke she could cover for me. I had been joking when I said it, but sure enough, I was right in the middle of cross-examining a witness when I knew that the kindergarten cooties had got me! The witness was busy answering my question and the judge was looking down at the file on her desk when I stood up and booked it out of the courtroom — and not a second too soon!

As I was coming out of the restroom, feeling much better, my junior associate was coming out of the courtroom with a deer-in-the-headlights look on her face. She said that she had told the judge what happened and asked for a recess because she couldn’t think of any questions to ask. I went back in, finished the cross-examination, and the judge ruled in my favor! As soon as it was over, I went straight home. I barely got my car into the driveway before round-2 hit and the rest of the evening was spent violently heaving everything except my stomach itself.

Needless to say, I did not go to work the next day! The kids and I stayed home and played games. Around mid-morning, it was Raine’s turn for the stomach bug. Fortunately, she only puked once and didn’t seem to be as affected by it as Carter and I had been. 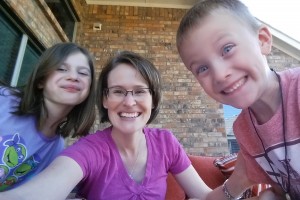 The weather was gorgeous, with temps into the 80s, so we spent some time outside. We played candyland . . . 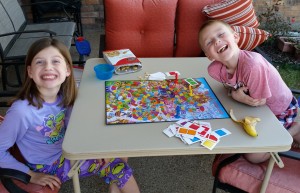 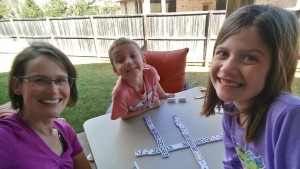 Daddy had already planned to take Wednesday through Friday off to play with the kids, so they ended up spending the entire week at home. They did a lot of jumping on the trampoline with their friends. 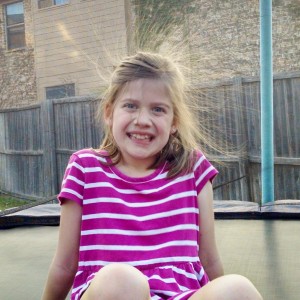 The weather turned cold on Thursday. We didn’t get any hail at our house, but the parking lot at work was covered with this when I arrived: 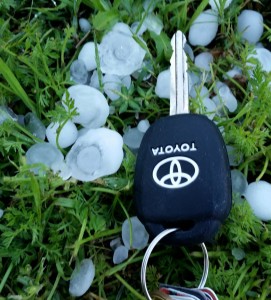 That morning I had a meeting in the hospital district and there was still golf-ball-sized hail in the parking lot when I arrived. More than one person I work with had her windshield cracked by the hail. That’s spring-time in Texas, I guess!

One thought on “Spring break”