Carter FINALLY had his first day of preschool today. Raine started three weeks ago and Carter has been counting down the days until he got to start school too. He was double-excited because he has Ms. Melissa as one of his teachers again.

He didn’t want me to take a photo of him on our way out to the car — he told me he was going to do a mopey face. 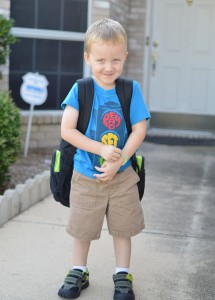 But he just couldn’t hold back the giggles! 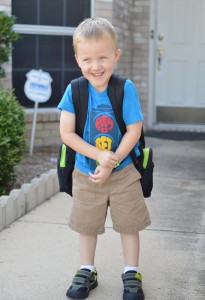 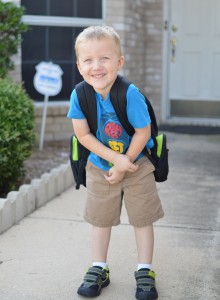 It was really weird for me to take Carter to the same class that Raine was in last year. Raine was the oldest in the class because her birthday was just after the cut-off; Carter is one of the youngest in the class because he just made the cut-off. I think Carter finds it a little odd too, but he is happy to be a “Big 3” (as he calls it) since Ms. Melissa is there. It will be interesting to see how he does with the older kids!