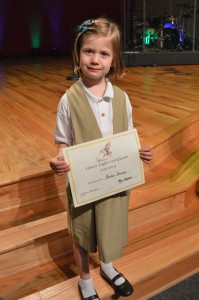 Honor Eagles are selected six times during the school year. One student from each of the eight Elementary classes is recognized by their teacher as the Honor Eagle. (There are two kindergarten classes, two 3rd grade classes, and one each of 1st, 2nd, 4th, and 5th.) They are awarded a certificate and a chocolate eagle medallion during Elementary Chapel. 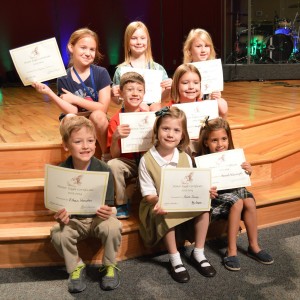 We are very proud of Raine for being such a terrific girl! She is a good example of all the Honor Eagle characteristics and really tries hard to choose the right in everything she does. It has been fun to serve in Primary the past two years and see how she interacts with others. She is like a little sponge, absorbing everything being taught. She loves learning and loves the structure and rules of a classroom. We are very proud of everything she is accomplishing and of the beautiful girl she is.

Daddy and I had a parent-teacher conference with Raine’s teacher, Mrs. Boegner, on Tuesday where she told us that Raine was going to receive the award — she told us when to come so we could see it awarded. She also told us how she frequently uses Raine as an example of good behavior in class. Raine is doing very well in school all-around. She has an A+ in both Bible and Behavior — the only two grades they get during the first 9-weeks!

School has been a fun experience for us so far. Raine’s class and teachers are great. This is Mrs. Boegner’s 21st year teaching; she definitely knows what she is doing. There are 13 kids in Raine’s class so the teacher has the opportunity to work with them one-on-one and really get to know each of them. When Raine missed school because of a fever, Mrs. Boegner personally called to check on her.

Raine comes home each day and tells us all about her adventures, it’s very entertaining! One day she told me about how her friend Emily didn’t have any food for snack time and how she shared her snack with her friend. I praised her for being such a good friend and sharing her snack. A few days later she told me about how her friend Mayla wanted some of her lunch but she didn’t give it to her, citing the rule about not sharing food as her justification. I had to laugh because this rule didn’t come into play when she was sharing the applesauce that she didn’t like, but now all of a sudden it was an absolute law when someone wanted the crackers that she really likes! Ah, the politics of kindergarten!

Since Raine’s school is K-12, they have a football team. We attended the first home game and tailgate party this Friday night. It was great . . . unless of course you cared about winning. I think we were down 35 to 7 when we left half-way through the second quarter. But Carter loved it! 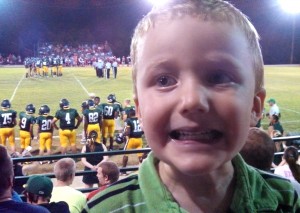 Once the M&M’s were gone, Raine was more interested in playing on the playground! 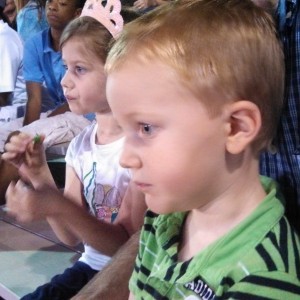