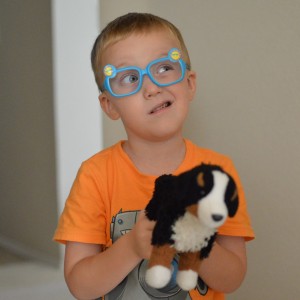 June 23 — This one needs a little explanation: Carter is at that really awkward-for-adults height where his head and shoulders are as high as the average rear-end. It drives Daddy crazy when Carter hugs him from behind or pokes him to get his attention. This little exchange occurred at one such moment.
Daddy to Carter: “We don’t touch other people’s bums!”
Carter: “You’re not other people. You’re just Daddy.” 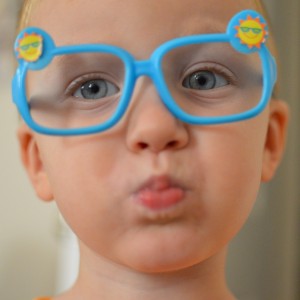 July 5
Carter playing fetch with Raine: “Go get it boy!”
Raine: “I’m not a boy. I’m a girl.”
Carter, defending his prior statement: “You have a head.”
Raine, not fooled by this ridiculous argument: “Yeah, girls have heads.”
Carter, now sidetracked from his original argument: “Girls have heads under them hair.”
Raine, still in argument mode: “No. Girls have hair on TOP of their heads.”
By this point, Carter’s attention was drawn to something else and he wandered off.
We’re going to have to work on his trial skills! 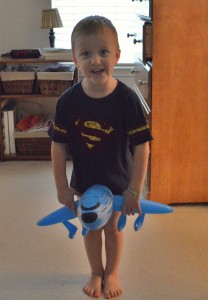 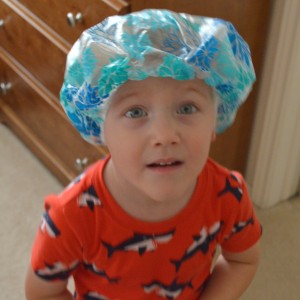 July 8
Me, cutting Raine’s fingernails: “These are some dirty fingernails, Rooey.”
Raine, just as I was cutting a particularly dirty one: “I think that brown stuff is boogers from picking my nose.”

Raine dressed up as the Lollipop Princess from Candy Land during Homecoming week. The theme for the day was your favorite toy or game. 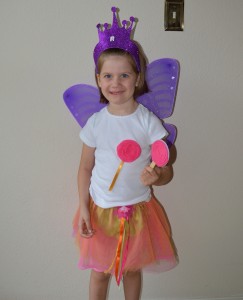 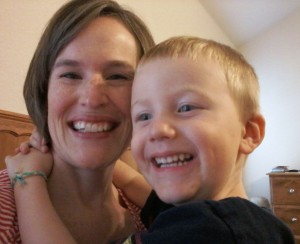 August 25
Raine, riding into the kitchen on a PVC pipe: “Here Carty, wanna ride?”
Carty, climbing on the back: “What is it Raine?”
Raine, as they ride out of the kitchen: “Oh, it’s just a pole.”
Carty, obviously expecting something a little more exciting: “Oh . . . why am I riding on a pole?”

Carter riding his horse, pulling Raine’s wagon — I’m not sure what they were playing. 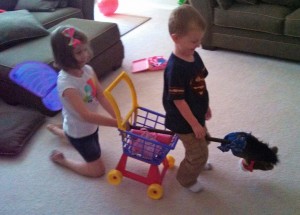 September 1 — Daddy sleep-reading to the kids. He will sit down to read them a book when he gets home from church but every couple pages his voice trails off to gibberish as he falls asleep mid-sentence. He usually wakes up before it goes too long, but occasionally the kids will have to turn around and sternly tell him to “READ” before he wakes up. Apparently all that napping he does up on the stand isn’t quite enough!! 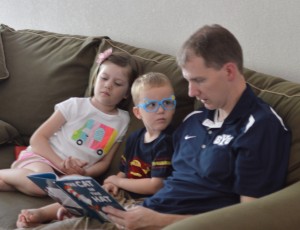 September 21 — This one didn’t involve the kids, but it was pretty funny.
Our Stake had a Bishops and Wives Conference that started with a meeting at the church and then moved to the Dallas Temple. As DJ and I drove to the Temple, he told me about how he feels so young and out-of-place in meetings with the other bishops in the stake. I emphatically assured him that he didn’t look that young, that he fit right in, and that his “baby-face” was a thing of the past. We arrived at the temple at the same time as President Hollinger and as we stood there at the recommend desk a temple worker approached DJ and asked if he was Elder Hoffman. He politely told her that he was not and turned back to the desk. President Hollinger turned around and laughed, “You just got mistaken for a young, eighteen-year-old missionary!” I just rolled my eyes as I watched my entire argument get thrown out the window and trampled under-foot!

{Most of the photos are of Carter because he’s the only one around to photograph now that Raine is in school! But I figure there have been enough posts about Raine lately that this just helps balance it out.}